When Dr Ron Bilow experienced a major emergency in his hospital, it got him thinking about the role of the radiology department.

Here he explains what led to the radiology department becoming an integral part of the organisation’s disaster management plan.

What would you do if large number of these sports spectators (right) suddenly arrived at your hospital after a disaster occurred at the event?

What arenas can you identify in your vicinity that may serve as a gathering site for a large number of people? This could be in the form of sports stadiums, performance halls or amphitheaters, schools, shopping districts, hotels, airports, even restaurants and movie theaters. Is there a public transportation system near you? Are there elevated roads or railroad tracks nearby? Do you live in an area that is prone to earthquakes, fires, tornadoes, tsunamis or landslides? Whether it be from a natural event, a faulty device or other accident, or intentional harmful acts by one or more persons (as shown in the photo below) you probably need to be prepared to handle a rapid surge in patient influx at your institution. 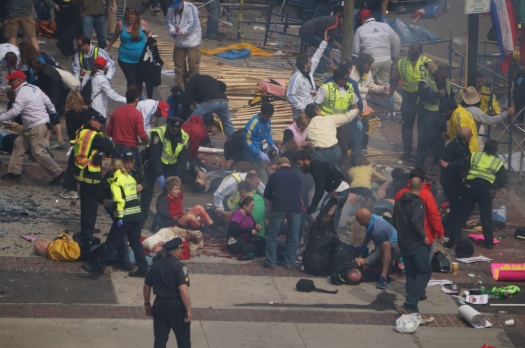 Allow me to continue with this brief illustrative story: I was covering the emergency radiology service at my level one trauma center one day when the administrators received a telephone call alerting us to a roof collapse, resulting in an estimated 100 potentially injured patients. What I witnessed was, simply put, amazing…efficiently coordinated preparation for the worst scenario imaginable.

The nursing staff, emergency physicians, emergency medical technicians (EMTs), clerical staff and housekeepers began preparing the emergency center (EC) for a high volume of patients by clearing out those awaiting transfer to the operating room (OR) or hospital ward, or discharge home. Additionally, extra stretchers were brought into trauma bays and hallways, and each was stripped down, sanitized and made ready with clean linens. Equipment was organized and put away, extra IV poles and blood product pumps were brought in, and each room was either verified ready or had its depleted stock replenished. In a matter of perhaps 15-20 minutes, the EC was ready to handle the onslaught. In short, predefined protocols were rapidly implemented during the incident, and most of the people knew their role.

Watching rescue helicopters from my office

Throughout the process, I stood in awe, yet somewhat disappointed…and even a bit uncomfortable…that I didn’t have a role…or, if I did have a role, I didn’t know what it was.

It got me thinking…as a radiologist, what is expected of me? What am/was I supposed to be doing to help prepare? What will be my role when the patients arrive? Is it merely to read whatever imaging exams are obtained, or is there some additional way I can help manage the problem?

It is clear from the above scenario, that our hospital has a plan for how best to handle the increased load after a mass casualty incident. This is known as a disaster management plan (DMP). In order to achieve that, leaders had to consider various scenarios and determine how the workers in each department should respond. It was also clear that the planning went much further than the EC. Phone calls were made to the receiving ward’s charge nurses alerting them that patients were coming out of the EC due to the pending influx of new trauma patients, per the hospital DMP. The OR was notified that they would receive patient’s waiting for surgery in their holding area. In short, things ran very smoothly, without pushback from the receiving services. Perhaps even additional staff were called in from home by one or more departments?

Whatever the case, it was also glaringly obvious that the radiology department had been left out of the planning, and in fact, nobody in radiology services had any idea how to handle or respond to a MCI and the resultant DMP activation. And the truth is, without a radiology department DMP, the hospital’s plan will fail. Imaging services will be rapidly overwhelmed due to lack of adequate resource management, and patients will suffer. It needs to be determined ahead of time how to decrease wait time for imaging services, speed up delivery of each examination, how reports will be disseminated and to whom, and who will do what work. This simply cannot be achieved without prior analysis and planning.

It is common knowledge that imaging has been increasingly used over the past few decades in the evaluation of critically ill patients, and for the most part, has become the standard of care. Through drills and real life experiences, researchers have shown how imaging services can become a severe bottleneck in implementing care during the hospital phase of a mass casualty incident. Thus, it seems essential to include technical and physician leaders from the radiology department in planning how best to manage the surge in patient volume after a disaster occurs. In our institution, we have begun the process of being incorporated in our hospital DMP, and hope to expand our role to help facilitate further excellence in the city-wide disaster response. Is it time for you to do the same?

After graduating from The Chicago Medical School in 1996, Dr Ronald Bilow completed his residency in diagnostic radiology at Santa Barbara Cottage Hospital (Santa Barbara, California), and subsequently underwent fellowship training in Emergency Radiology at The University of Texas, Health Science Center in Houston (now the McGovern Medical School), and Musculoskeletal Radiology at the University of California, San Diego. He currently holds the position of Assistant Professor on the McGovern Medical School faculty in Houston, Texas, where he teaches medical students and both emergency medicine and diagnostic radiology residents and fellows. Dr. Bilow performs his clinical duties primarily at a level one trauma center, Memorial Hermann Health System – TMC, in Houston, Texas. He was recently appointed as radiologist member to the joint University of Texas, McGovern Medical School – Baylor University Medical School Disaster Management Planning Committee. He has been a Fellow Member of the ASER (American Society of Emergency Radiology) since 2005, and has served in numerous leadership roles including Case of the Day Director, Education Committee Chair/Co-Chair, Director at Large, Treasurer, Bylaws Committee Chair and Member, and Strategic Planning Committee Member. He has also held membership on the Annual Meeting Program Planning and Scientific Program Committees.