For a patient with cancer, multiple hospital visits prior to radiotherapy can be stressful and inconvenient, especially for those in remote areas who have to travel long distances to each appointment. To tackle this problem, Cork University Hospital introduced a new rapid access palliative clinic (RAPC) to streamline their radiotherapy service. Dr Aileen Flavin, Consultant Radiation Oncologist explains.

Cork University Hospital (CUH) is the regional cancer centre for the south west of Ireland. The centre serves a large geographical area (16,421 km2) with a population of 664,500. A minority of the population (119,000) lives in Cork city, which means that most patients have to travel significant distances for radiotherapy (round trips of up to 260 miles).

With our new system, when referral for palliative radiotherapy is received, patients are booked into the RAPC clinic, which takes place twice a week. We have four patient slots per clinic and CT planning slots are reserved for these patients. At the clinic, patients are assessed medically, any pre-treatment medication needed is given, consent is obtained and a planning CT is subsequently performed. Radiotherapy is delivered on the same day if patients live more than 32 km from the hospital and are receiving a single fraction of radiotherapy. Same day treatment necessitates the patient being in the department for several hours, as treatment planning and checking treatment plans is time consuming. For patients living locally, it is easier for them to return for treatment the next day.

As a result of our new system, patients are certainly now being treated more promptly following referral than in the past. In the first three months the clinic ran (September to December 2014), 166 patients were treated. 35% received same day treatment, 33% were treated the next day and the remainder of patients were treated within three days. There was a 13% increase in the number of patients treated when compared with the same period in 2013, and in 2015 we have increased from 8 to 10 slots each week to cope with the numbers being referred.

And when we’ve evaluated the new service the comments have been very positive both from clinicians and patients:

“I feel for the first time like palliative patients have been given their own emphasis and importance.” Radiation Oncologist

“The dedicated nursing of this clinic … point of contact person is very important.” Patient perspective

“I couldn’t go back to the old system of having to negotiate a treatment slot for these patients and then hope I would be able to find a free clinic room to assess them in first.” Radiation Oncologist

It seems that our objective of improving access to palliative radiotherapy has been met. The current status is that the RAPC is well established in our department and now runs Monday/Wednesday/Friday. 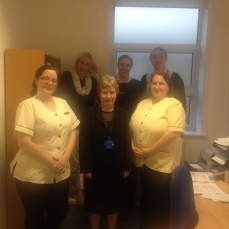