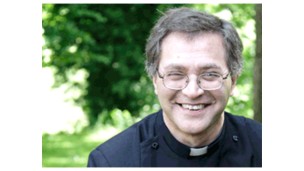 The Revd. Canon Dr. Mike Kirby, Chair of the BIR Oncology and Radiotherapy Special Interest Group, has a wealth of experience as a senior radiotherapy physicist, working on national guidance, developing clinical practice and teaching radiography students. As if this doesn’t keep him busy enough he has also taken on the role of Canon Scientist at Liverpool Cathedral where he is working to encourage dialogue and discussion about science and faith. Here he explains what the role involves.

I began work in the UK’s National Health Service more than 30 years ago, as a Radiotherapy Physicist at the Christie Hospital, Manchester UK.  Alongside my routine clinical work, my main research interest was in electronic portal imaging and portal dosimetry.  I then helped set up Rosemere Cancer Centre in Preston, UK from 1996 as deputy Head of Radiotherapy Physics and Consultant Clinical Scientist there.  During that time I contributed to and edited national guidance documents such as IPEM Reports 92, 93 and 94 and the multidisciplinary work, ‘On-target’.

My work moved back to the Christie in 2007 and as Head of Radiotherapy Physics and Consultant Clinical Scientist for the Satellite Centres, I helped to lead their development in Oldham and Salford as part of the Christie Network. My research and development work has primarily focused on electronic portal imaging, developing clinical practice and equipment development. 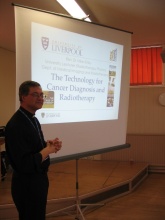 More recently my focus has been on teaching and learning for radiotherapy education as a lecturer (Radiotherapy Physics), especially using VERT, for Radiotherapy programmes in the School of Health Sciences, Liverpool University; but always with a focus on the wider picture of radiotherapy development having served on both IPEM and BIR committees throughout my whole professional career.

Alongside my scientific work, I am a priest in the Church of England; having trained and studied at Westcott House and the Universities of Cambridge and Cumbria, I hold graduate and postgraduate degrees in Theology. 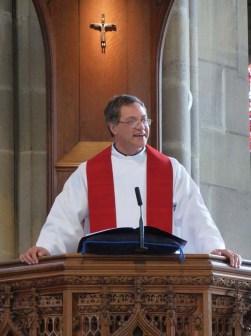 My ministry has mainly been in the Cathedrals of Blackburn, Chester, and Liverpool (Anglican) where I was Cathedral Chaplain.  I have recently (Feb 2020) become a Residentiary Canon of Liverpool Cathedral, with the title of Canon Scientist the primary aim of which is to encourage dialogue and discussion about science and faith.

I am a member of the Society of Ordained Scientists and have given numerous talks on Science and Faith to schools, colleges, churches and other institutions.  These have included organising lecture series with world renowned speakers at Blackburn (2016) and Chester (2018) cathedrals; a third series was delivered at Liverpool Cathedral in May 2019, and a fourth series is planned for May 2020.

My role is to consider all sciences (physical, clinical, social) in ecumenical and multi-faith environments.  So I will look to work with initiatives already developing in other Christian traditions, other faiths and secular organisations to discuss current challenges, such as climate change, medical ethics, health initiatives and information for cancer, dementia and mental health issues etc.. 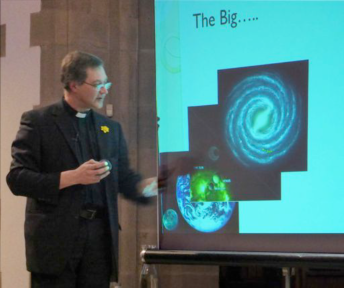 My work will be part of the clear faith objectives of the cathedral as a place of encounter for everyone, through events and initiatives within the cathedral, but also beyond.  This will include services focusing on health issues and pastoral challenges (such as bereavement and loss); events engaging with science, its wonders and challenges; fostering further relationships with local and wider communities on science and healthcare education, and with academic and scientific institutions too; encouraging scientific and ethical engagement with schools and colleges, as I have done so previously in both Chester and Blackburn dioceses.

I will be encouraging Christians and Christian leaders to understand science and engage with it more, alongside other national projects such as the recently announced ECLAS (Engaging Christian Leaders in an Age of Science) project of Durham and York universities and the Church of England.  As a self-supporting minister (one whose paid employment is outside of the church), I will also look to encourage and highlight the tireless work of many others who already do this within the diocese and the wider national church.

Within all of this, I have always seen my vocation as being one within God’s service, for all people, with my work for cancer patients being right at the heart of it.

If you have any questions for Mike, you can send him an email at sigs@bir.org.uk

Mike is the co-author of the international student textbook on On-treatment Verification Imaging: a Study Guide for IGRT, through CRC press/Taylor and Francis with Kerrie-Anne Calder. They are both contributors to the updated UK national guidance on IGRT due out in 2020.

Mike, with the support of the SIG, has helped to organise a range of events for radiographers, physicists, dosimetrists, radiologists and oncologists. See the full programme here